Young Nationals Learning How To Win

There have been few bright spots in the Nationals’ history since moving to Washington, DC before the 2005 season. In the Nationals’ six full seasons in DC, the team has posted only a .423 winning percentage. But as Danny Espinosa’s 12th home run of the season sailed over the right field fence in the 10th inning last night to give the Nationals a 7-4 victory and series sweep over the St. Louis Cardinals, who came into the series in first place in the National League Central, there is suddenly a lot of reason to believe that Washington’s fortunes will change for the better in the near future.

Last night’s win has put the Nationals on a six-game winning streak. You would have to go back to August of 2009 to see the last time the Nats accomplished such a feat, when Washington won eight games in a row. While Espinosa made an error last night, the Nats had gone 130 2/3 innings, or 14.5 games, of clean baseball before that. Offensively, Jayson Werth started things off yesterday with his first career leadoff home run, but also the first homer by a National in the first inning all year. Roger Bernadina followed up with his second home run of the year, making it the first time since Brad Wilkerson and Jose Vidro did it on June 16, 2002 that the Nationals/Expos hit back-to-back home runs to start off a game. With Espinosa’s game-ending homer, it represented the first time in Nationals/Expos franchise history that they hit both a leadoff and walk-off home run in the same game.

While yesterday represented a number of firsts for Washington, the Nationals have been playing very good baseball throughout June, winning 11 of their last 16 games. During this six-game win streak, the Nationals have won in almost every conceivable way, with last night’s walk-off to a 10-0 blowout over the Cardinals the previous night to a high-scoring 8-6 victory in the first game of the series against St. Louis to a pair of 2-1 nailbiters and then a 2-0 victory over the San Diego Padres.

The Nationals, who trot out five position players in the lineup who are under 30 years old and have three starting pitchers, their closer and four other relievers in the same age group, are built for the future, but it looks like all of this young talent is learning how to win now. Washington is finally starting to see first baseman Michael Morse blossom into the potential middle-of-the-order hitter they need him to be, as Morse is hitting .365 with a .425 on-base percentage, a .771 slugging percentage, nine doubles, 10 home runs and 29 RBIs since May 22, a total of 24 games. Three other potential cornerstone players, 23-year old catcher Wilson Ramors (.248/.319/.406, 5 HRs, 19 RBIs), the 24-year old second baseman Espinosa (.233/.321/.463, 12 HRs, 41 RBIs) and 25-year old shortstop Ian Desmond (.235/.273/.336, 3 HRs, 19 RBIs), have not hit to their potential so far, but the Nationals are hopeful they will go on a hot streak similar to Morse. In fact, Espinosa is hitting .286/.356/.600 with 8 homers and 21 RBIs since May 16 (29 games) and Desmond is hitting .308/.341/.308 over the past nine games. Washington is still looking for Werth to get hot and live up to the seven-year, $126 million contract he signed this offseason. Werth has struggled thus far, hitting .240/.340/.426 with 10 homers and 26 RBIs for the season but should be given more protection in the lineup now that star third baseman Ryan Zimmerman has returned from injury.

What may be most encouraging about what the Nats have done recently is the fact that they have a 33-36 record despite playing baseball’s toughest schedule to this point (Nats’ opponents have had a .517 winning percentage) and having Zimmerman miss 58 games to this point. Washington is looking at the possible return of phenom starter Stephen Strasburg in August from Tommy John Surgery. Sitting just 5.5 games behind the Atlanta Braves for the NL Wild Card, the Nationals could be looking at their best record in DC if they continue to play good baseball. 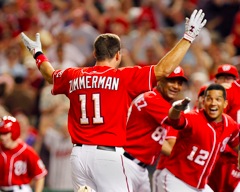 The past couple weeks have given Nationals fans plenty of hope for what looks to be a bright future ahead. Former No. 1 pick Bryce Harper is tearing up Single-A Hagerstown with a .326/.421/.585  batting line, 14 home runs and 45 RBIs in slugging percentage in 63 games. Harper could be playing in Nationals Park as early as next season, joining forces with Zimmerman, Werth, Morse, Ramos, Espinosa and Desmond to form a formidable lineup next to a young pitching staff that features the 22-year old Strasburg, 25-year old Jordan Zimmerman (4-6, 3.10 ERA, 1.08 WHIP in 81.1 innings),  26-year old John Lannan (4-5, 3.52 ERA in 87 innings) and 23-year old closer Drew Storen (4-2, 2.48 ERA, 16 saves). The Nationals could also make a big play in the potential Albert Pujols/Prince Fielder sweepstakes this offseason to add another bat in their lineup. While their time in Washington has not featured may positives to this point, the future looks very bright for the Nationals in DC.