After losing two of three games to the San Francisco Giants, the Milwaukee Brewers began their July 25th off-day in a three-way tie for first place with the St. Louis Cardinals and Pittsburgh Pirates in the National League Central. Milwaukee had been very aggressive in looking for ways to improve a pitching staff that ranked 26th in the majors in ERA (4.58) last season. The Brewers traded for starters Zack Greinke and Shaun Marcum in the offseason and then acquired New York Mets closer Francisco Rodriguez on July 13 to shore up the back end of the bullpen. However, Milwaukee’s moves had not paid off in the standings, as the upstart Pirates and a Cardinals team that had dealt with injuries to Albert Pujols and Adam Wainwright had both stuck with the more talented and healthier Brewers through the first 103 games of the season.

Just like that though, it seemed that everything clicked for Milwaukee while Pittsburgh and St. Louis’ seasons fell apart. The Brewers have won 22 of their last 25 games. In the same span, the Cardinals have gone 13-12 while the Pirates’ season has bottomed out by going 7-18. Suddenly, in a division that one month ago looked like it would be a sprint to the finish, Milwaukee is enjoying a very-comfortable 8.5 game lead on second-place St. Louis. 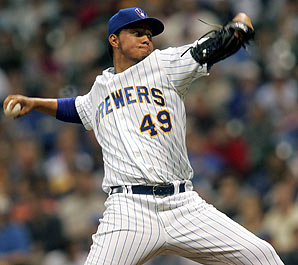 The Brewers’ pitching staff has also cranked it up a couple of notches over the last 25 games. Milwaukee has allowed only 2.52 runs per game since July 24. To put that in perspective, the Philadelphia Phillies’ vaunted pitching staff has allowed the fewest runs in the majors (405) and gives up only 3.29 runs per game. Brewers’ starting pitches have lost only one decision over the last 25 games. Greinke has been lights-out, pitching up to his potential by going 5-0 with a 1.57 ERA while striking out 37 and allowing 25 hits and 11 walks in 34.1 innings pitched. Yovani Gallardo (3-1, 2.06 ERA with 31 strikeouts, four walks and 25 hits allowed in 35 innings), Randy Wolf (4-0, 2.80 ERA with 16 punch outs, 32 hits allowed and 11 walks issued in 35.1 innings) and Marcum (2-0, 3.58 ERA with 17 strikeouts, six walks issued and 33 hits allowed in 32.2 innings) have all been stellar in putting zeroes up on the scoreboard since July 24 before handing it over to the bullpen. 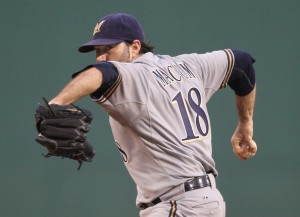 On their off-day July 25, the Brewers woke up to a first-place tie with the Cardinals and Pirates in the Central. Milwaukee had loaded up on pitching to try to make one final playoff run in Prince Fielder’s last season under contract, but their aggressiveness in trading for Greinke, Marcum and Rodriguez had not paid many dividends. Then, all of a sudden, everything has come together for Milwaukee. The Brewers have won 22 of their past 25 games, building an 8.5 game lead on the second-place Cardinals in the Central. Milwaukee has hit well even with injured All-Star Rickie Weeks on the DL and their pitching has been superb. While the Phillies have baseball’s best record, the Brewers have become the biggest challenge to them in the National League. If Milwaukee can continue to stay hot, a team that has never won the Central or a National League Pennant may make history.