Top Strikers Get Together On Pitch As No. 3 Terps Clash With No. 24 Duke

As the Maryland men’s soccer team headed into the locker room for halftime in their match against Division II Adelphi Tuesday, the Terrapins found themselves in unfamiliar territory.

Not only were they tied on the scoreboard at zero, but the Terps were outshot in a half, 4-3 by the Panthers, for just the second time all season. However, a more focused Maryland group emerged in the second half. The Terrapins outshot Adelphi 11-0 and used two goals from reserve forward Jake Pace in the 73rd and 74th minutes, respectively, to defeat the Panthers 2-0 in their final non-conference regular season game of the season. The goals were the first of Pace’s career. In helping to pitch Maryland’s seventh shutout of the season, freshman goalkeeper Keith Cardona earned his first career victory.

After a 2-1 loss in Charlottesville last week, Maryland (12-1-1, 3-1-0 ACC) resumes ACC play tonight against the Duke Blue Devils (7-4-1, 3-1-1). Duke has not been defeated in seven straight games, the Blue Devils’ best run since 2006. During that stretch, the Blue Devils are 6-0-1 and have outscored opponents 24-9, the most goals Duke has scored in a seven-game stretch since 2004. The Blue Devils are tied with North Carolina on top of the ACC standings to move into the College Soccer News poll for the first time since August. Duke is ranked No. 24 in the nation.

Tonight’s battle will feature two of the top strikers in the country. Duke’s Andrew Wenger leads the nation in both goals (15) and points (37). During the Blue Devils’ seven-game win streak, Wenger has scored 12 goals to go along with seven assists for 31 points. After a four-goal, one-assist performance in a pair of victories last week, he is was selected as the Disney Soccer/NSCAA, ACC and College Soccer News Men’s National Player of the Week. Wenger was also voted to the Soccer America Team of the Week for the second time this season.

On the other side though, Maryland’s Casey Townsend is not far behind. Townsend has scored 12 goals for a total of 24 points this season, both of which rank second in the conference behind Wenger. However, while Wenger has accounted for 22 of Duke’s 29 goals, the Terps scoring attack is much more balanced. Townsend has accounted for 12 of Maryland’s 34 goals. John Stertzer is second on the Terrapins with nine goals and 21 points while Patrick Mullins has five goals for 12 points this year.

Here are some more notes for tonight’s game:

You can listen to the action live on WMUC Sports at 6:45. Steve Goldstein will be on the call along with Luke Jackson. 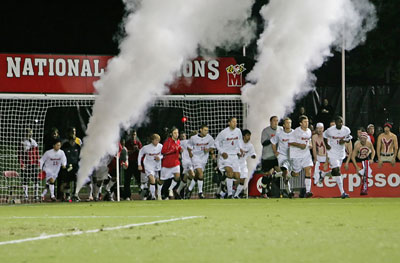