Luke Jackson, Matt Castello and I kick off the show with our thoughts about Randy Edsall and Maryland football before moving to Mark Turgeon and Terps basketball. We then shift to the Capitals’ new coaching change, Week 12 in the NFL and some MLB Hot Stove.

I was on the airwaves by myself this week. Monday Night Madness began with discussion of both the American League and National League Wild Card races. I then discussed Week 3 in the NFL with the excitement surrounding the Buffalo Bills and Detroit Lions and why the Philadelphia Eagles, New York Jets and Pittsburgh Steelers. The show wraps up with the decline of Maryland football.

You can also listen to our brand-new USA-themed introduction by clicking below!

Plenty of other quarterbacks received more fanfare after the first weekend of the college football season. The obvious names already in the Heisman Trophy discussion are Stanford’s Andrew Luck, Oklahoma’s Landry Jones and Ryan Broyles, Oklahoma State’s Justin Blackmon, South Carolina’s Marcus Lattimore, Alabama’s Trent Richardson and Boise State’s Kellen Moore. However, judging from his performance against Miami in the rain Monday on national television, Maryland’s Danny O’Brien could emerge as a darkhorse in the Heisman running if he plays the rest of the season like he did against the Hurricanes.

There were concerns coming into the season if new Terps head coach Randy Edsall would utilize O’Brien’s special skill set after featuring a ground-and-pound attack during his 12 years as Connecticut’s head honcho. Here is a look at how often the Huskies liked to run the football under Edsall:

In Edsall’s last six years at UConn, the Huskies never threw the ball more than 41.6 percent of the time on offense. In three different seasons, Connecticut kept the ball on the ground more than 6o percent of the time. As evidenced by the chart above, the last time UConn put the ball in the air more than they ran it was seven seasons ago when future-NFL quarterback Dan Orlovsky was under center for the Huskies. Granted, from 2005 through 2010, Edsall had a very gifted stable of running backs that included Donald Brown and Jordan Todman to help ease the pressure on an overmatched group of quarterbacks. In 2005, 2006 and 2008, the Huskies did not have a passer throw for more than 900 yards the whole season. Tyler Lorenzon’s 2,367 yard performance in 2007 is the only time UConn has had a passer throw for more than 1,500 yards in a year since Orlovsky graduated after the 2004 season. Even with his team’s ineptness at quarterback in his last six years at Connecticut, there were reasons to doubt whether Edsall would be able to transform to a more passing-oriented offense in his first season in College Park after featuring a run-first offense for so long.

The first Maryland drive of the 2011 season put to rest the doubts that Edsall and new offensive coordinator Gary Crowton would be reluctant to allow O’Brien to air it out consistently in the brand-new Terps attack. O’Brien, who threw for 2,438 yards, 22 touchdowns and eight interceptions last season while completing 57 percent of his passes en route to becoming the first Maryland player ever to take home ACC Freshman of the Year honors, lined up in the shotgun almost exclusively as the Terps spread the field and ran a fast-paced offense that did not allow the Miami defense time to make substitutions. 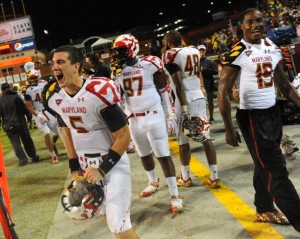 The accelerated offense kept the Hurricanes defense on their heels as O’Brien shredded a weakened Miami secondary, finishing 31-for-44 (70.5 completion percentage) for 348 yards, one touchdown and one interception. The redshirt sophomore quarterback showed maturity, poise and coolness beyond his years with under four minutes to play and the Terps trailing 24-23. At Maryland’s own 26 yard line, O’Brien launched a 52-yard bomb to Kevin Dorsey to help set up Nick Ferrara’s game-winning field goal. Staying calm and collected under center, O’Brien piloted a fourth-quarter comeback drive to give the Terrapins their first win of the season.

The one area O’Brien left for improvement was his redzone management. He led the Terps inside Miami’s 20-yard line on seven of Maryland’s eight drives, but the Terrapins could only muster one touchdown out of those possessions. O’Brien also tossed an interception in the endzone on a play where he could have instead just walked across the goal line to score another touchdown. But while Maryland came away with a touchdown on only one drive that finished inside the Hurricanes’ 20, O’Brien failed to lead the Terps into the redzone only once all night. The Maryland redzone offense should improve in the coming weeks with the return of running back D.J. Adams, who scored 11 touchdowns last year but missed the Miami game due to a violation of team rules. More practice time with his brand-new receiving corp should also allow O’Brien to become more comfortable throwing to his set of weapons in the heavy traffic that comes with passing deep in an opponents’ territory.

Sure, five Miami Hurricane defensive starters were suspended for the season-opener Monday night. But Danny O’Brien’s performance, poise under pressure, ability to lead his team consistently down the field, the willingness of the new Maryland coaching staff to open up the passing attack and what should be an improved redzone attack in the coming weeks have to make O’Brien a darkhorse candidate for the Heisman Trophy. His success has largely gone under the national radar in his Maryland career so far. However, as long as he continues to mature and develop as a quarterback, it won’t be long before the rest of the country takes notice and O’Brien plays himself into the running for college football’s top honor.

On The Subject of Maryland’s Uniforms

There has been a lot of debate regarding Maryland’s new state pride uniforms. There is obviously a lot going on with them, but like them or not, the uniforms have to already be considered a success. They are the buzz around the whole nation. Twitter blew up regarding the uniforms, as #Maryland was trending both during and after the Terps-Miami contest not because of the game, but because of Maryland’s new look. Sportscenter dedicated a whole segment of the show to discuss them. For a brand-new coaching staff looking to rebrand the program around the state of Maryland, the attention that has now been thrust upon the Terps over their uniforms after a nationally-televised win is tremendous. And for a fanbase that had a lukewarm response to the hiring of head coach Randy Edsall over Mike Leach, the uniforms, as well as an exciting opening-night victory over a brand-name opponent, go a long way in building consistent fan support in this undoubtedly new era of Maryland football.

In a state that obsesses over its flag, the direct use of the flag in the design of the jerseys is perfect. The new uniforms are a source of state pride. Maryland is now the only school that has uniforms that are a direct representation of the state they play in. With the buzz the uniforms have already provided to give Maryland football this kind of attention and the connection the jerseys and helmets bring to its home state, the new Maryland football uniforms are an immediate success to a program that needs as much attention as possible on a national stage as it looks to take the next step towards becoming a national powerhouse. The buzz they have created, as well as the direct connection to the state pride Marylanders feel for in their flag, give Maryland the best uniforms in all of sports. 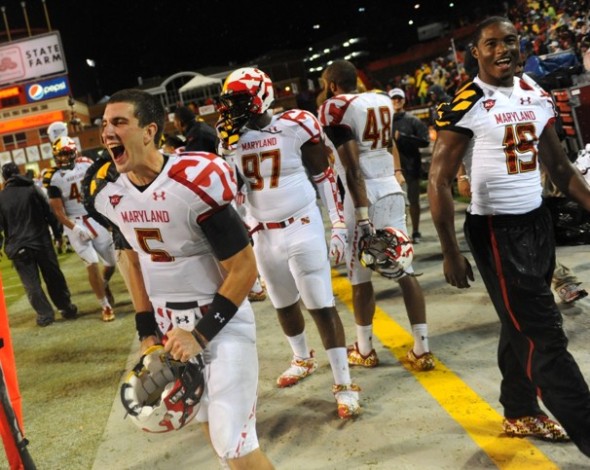 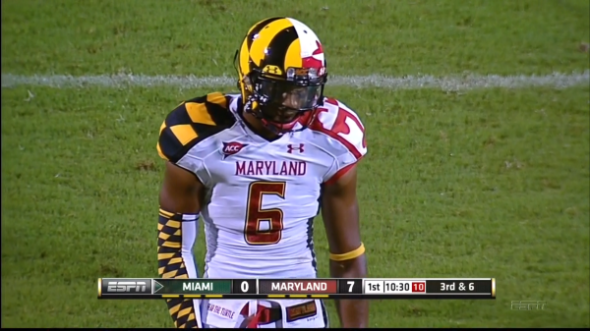