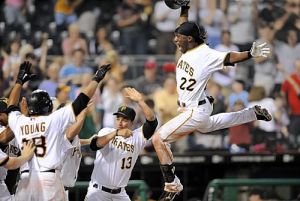 No one in their lineup is hitting over .300. The most wins in a season any of their starting pitchers has ever had is 12. Their closer never had more than nine saves in a single season until this year. Yet, somehow the Pittsburgh Pirates are 45-41, just 1.5 games behind the St. Louis Cardinals in the National League Central as the calendar turns to July. After 18 consecutive losing seasons, including four straight last place finishes in the NL Central, is this the year the Pirates finally enter back into respectability, and possibly even the playoffs?

The 2010 Pirates had baseball’s worst pitching staff, finishing dead last in the majors with a .282 batting average against, .798 on-base plus slugging percentage against and a 5.00 ERA. Pirates starters threw just 871.2 innings, allowing opponents to hit .297 while posting a 5.28 ERA, all of which were last in baseball. As a whole, Pittsburgh’s staff has not ranked in the top half of the majors in either ERA or BAA since 2004, when they finished 15th in ERA (4.68) and 12th in BAA (.267). 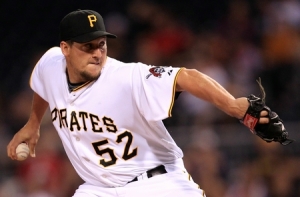 The case of Alvarez, rated the No. 8 prospect by Baseball America before the 2010 season, is particularly perplexing because of the way he hit towards the end of last season. In his last 54 games of the 2010 season, he hit .285/.351/.505 with 15 doubles, 9 home runs and 43 RBIs. The Pirates expected more of the same in 2011, but Alvarez was a major disappointment before injuring his quad on May 19. Once he returns from injury, Pittsburgh will need Alvarez to start to hit towards his potential and continue to progress towards being a potential star.

With their 5-1 victory over the Houston Astros last night, Pittsburgh is four games over .500, the most they have been this entire season. The last time Pittsburgh was this far above .500 this late in the season was on September 19, 2005. In fact, the Pirates have only been four games above .500 just twice since 2005, with the other time being on April 26, 2009.

Their recipe for success has been no secret. Pittsburgh will need to sustain its good pitching throughout the second half of the season to continue to be a threat to the St. Louis Cardinals, Milwaukee Brewers and Cincinnati Reds in the Central. However, with pitchers who largely pitch to contact, opposing hitters’ batting average on ball in play indicates that the Pirates’ staff has been lucky throughout the first half of the season. Veras (.216), Resop (.290), Hanrahan (.262), McCutchen (.269), Karstens (.240), Correia (.272) and Maholm (.253) all have BABIPs well below the league average of .300. While the Pirates have young talent and their organization is certainly taking a step forward towards respectability this season, it is unlikely that Pittsburgh continues to float above .500 and fight in the Central unless the Pirates either suddenly start hitting better or are able to continue to get lucky on balls hit in play throughout the second half of the season. While they have been a great story up to this point, statistics say it is unlikely that the Pirates will continue to be a postseason threat over the final three months of the season.