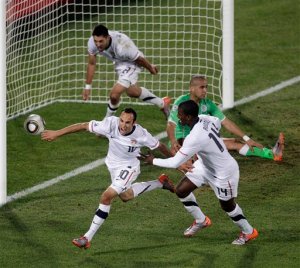 Just over a year ago, the United States men’s soccer team was dueling Algeria in the 2010 Fifa World Cup for the right to advance to the knockout round of the tournament. About 90 minutes had gone by with the game still scoreless. What happened next became one of the greatest moments in United States soccer history. U.S. goalie Tim Howard began an American counterattack by knocking down an Algerian shot and throwing the ball to Landon Donovan near midfield. Donovan sped downfield, passing the ball to Jozy Altidore just inside Algeria’s 18-yard box. Altidore crossed to Clint Dempsey, who was unable to lift the ball over Algerian goalie Rais Bolhi. The two collided and the ball rolled out to Donovan, who slammed home a shot from about seven-yards out to give the United States a 1-0 lead just 45 seconds into four minutes of stoppage time.

The United States would hold on to win its first World Cup match in eight years. America finished on top its first-round group for the first time since the original World Cup in 1930. Landon Donovan and the rest of the men’s soccer team had done something no other American soccer team had done before: captivate America. His goal set off reactions of pure jubilation throughout the country, making America’s next match against Ghana (a 2-1 United States loss) must-see TV.

The United States women’s soccer team faced even longer odds yesterday in the quarterfinals of the 2011 Fifa Women’s World Cup. The Americans trailed Brazil 2-1 in the second minute of stoppage time following 30 minutes of overtime. The United States had been playing 10-on-11 because of a red card given to Rachel Buehler in the 65th minute and were dangerously close to their earliest World Cup exit in history. Near the American 18-yard box, Christie Rampone was able to strip the ball away from Brazilian forward Christiane. The ball ended up at the feet of Ali Krieger, who quickly fed it up to midfielder Carli Lloyd. Lloyd dribbled to the left side of the field before finding Megan Rapinoe with a pass. Rapinoe took a couple dribbles before sending in a beautiful cross to Abby Wambach, who headed it into the back of the net to give the United States a miracle comeback to tie the game at 2.

However, the Americans still had work to do. With Wambach’s late goal, the game would be decided on penalty kicks. The Americans led 3-2 on PKs as Brazilian defender Daiane teed up the ball. Each of Brazil’s first two shooters, Cristiane and Marta, had beaten U.S. goalie Hope Solo. Daine decided to shoot the ball towards Solo’s right. With a full-extension dive, Solo was able to knock away the ball. The United States was able to convert each of their final two penalty kicks to finish off their comeback and win the match 5-3 on penalty kicks after a 2-2 tie. The Americans will play France on Wednesday at 11:30 a.m. in the semifinals of the women’s tournament.

Landon Donovan and the United States men’s soccer team apparently began a new American soccer trend of miraculous plays in the game’s dire moments with their performance in the World Cup last year against Algeria. Abby Wambach and Hope Solo helped the United States women’s soccer team follow suit with incredible efforts when all seemed lost against Brazil. The United States’ ability to show a flare for the dramatic has made soccer suddenly the talk of the sports world once again, just like it was last year in the days after Donovan’s goal. As long as the American national teams can continue to pull out nail-biters, soccer will continue to capture the American audience, in a country not known for its love of soccer. They may be different teams who play unique styles of soccer and own varying histories of success, but both the men’s and women’s American soccer teams share the similarity of playing their best in the game’s biggest moments on soccer’s biggest stage.